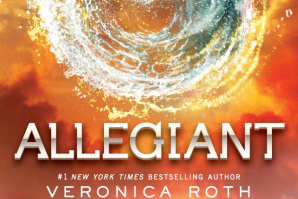 SPOILER ALERT! If you haven’t finished either Ilsa J. Bick’s Ashes Trilogy or Veronica Roth’s Divergent Series, AVERT YOUR EYES! (But come back when you have read them. I’ll have cookies & tea waiting.)

Disclosure: This post is longer than usual. It began as one idea then quickly morphed into a much more complicated and interesting concept to me. Please excuse the self-indulgence…

I’ve been pondering this post for some time. At least, since I finished Veronica Roth’s Allegiant, potentially 2013’s most disappointing read. My dissatisfaction is due to the lack of care in the writing of the final Divergent Series book. I was bored. Nothing was happening. The plot lay there like a twelve-year-old boy’s tongue during a first kiss. Where were Roth’s active, rash, complicated characters? Or the exciting and dangerous plot from the previous books? A true let-down from its predecessors. So, WHY didn’t Allegiant work?

By happenstance, I was rereading Ilsa J. Bick’s Ashes when my pre-purchased Allegiant downloaded. The books’ sharp contrasts were whetted by their temporal relation in my mind. Potentially, my memories of these series were already connected. Each book was released within months of the other1; and generally, I read them that same month. (Granted the concentrated timeline by which I was rereading Ashes when Allegiant released was a fluke.)

Regardless, their proximity buoyed my hackneyed theory about internal dialogue. Less a theory, more a simplistic observation stemming from my favorite novels’ commonalities: Dostoevsky’s Notes from Underground, Percy’s Love in the Ruins, Woolf’s Mrs. Dalloway, Austen’s Persuasion, McGowan’s Duchess of Nothing and Nabokov’s Lolita. All saturated with the internal lives of the protagonists; “quiet” novels. Works with less physical action than “thought acts2.” Books that pleasurably wallow in the “second act issue;” those contemplative moments when the protagonist (or multiple characters) pause(s) to decide their path. Both Ashes and Allegiant have elements of this contemplative style. Bick’s work in this style is exemplary. Roth’s doesn’t even try. So the question remains: why and how does one succeed and another fail?

The vicissitudes of characters’ internal lives need to be as active and plotted as the physical actions in the book. Thinking itself is an action — and the written expression of thought should be engineered as such. Thus, the writer’s approach to a character’s thoughts, should be the same, or substantially similar, to their approach to action sequences.

Further, like skillful plotting, the expressed internal world and thought acts should provoke the reader to continue reading (AKA, the “what happens next?” response). We all skim sections of books. My eyes usually skip across paragraphs of descriptive details. Whether this is due to poor writing or my own inattentiveness or eagerness to move forward within the plot doesn’t matter. However, the writing of the internal life and thought acts should be weighted appropriately by the writer. Better stated, the internal life of a character should not be filler, it should be meaningful and dynamic and toothsome. The reader should be eager for the character’s next thought; thoughts reaching for a climax, a conclusion, a further knowledge about the story and other characters. Thoughts that are being discovered by the character and reader in tandem. Thought acts should bind the reader to the character, in thought, in emotion, in relatability and in time.

Ashes is an exemplary YA novel. Rich in action, character, and psychology, Bick excels at creating tension, eliciting fear, raising stakes, plotting and withholding information. The series is as fearsome as watching The Walking Dead alone. Perhaps, Bick’s true talent – and so much of what was missing in Roth’s book – is the structure of active thought. A world of thoughts, isolated within the character, buzzing with life and, more importantly, following a narrative arc. The protagonist, Alex’s, thoughts grow and morph and develop and conclude and pause and stumble and reject and accept. Her internal world is as active as her body in the physical world. It is her dependence on her mental and physical states that keep her alive, as well as place her in greater danger.

Kincaid’s words came back: Flies’ll die in the cold.

That was right. Flies died in the cold. Leave a dead anything out in the cold, and there would not be blowflies, not in winter. She had seen no flies in Honey’s stable at all, not even four weeks ago. She’s seen more than a few dead bodies on the road, but no flies. And at the gas station, dead Ned…

“No flies,” she murmured. But the boy had maggots. Maggots could only come from flies, but if they’d found him in an abandoned barn, how had he stayed warm? What would’ve warmed up the barn enough so flies could live in winter?

Ok, maybe the boy had started a fire. No, that couldn’t be it. That boy was out cold when they brought him in; he was just the other side of dead. Hell, he had been dead.

Which meant that someone else started the fire. Someone else kept the boy warm. There had been someone else, maybe more than one person.

But Greg had said, Found him by his lonesome in a barn.

No, Greg. Not hardly. And they’d been nearer Oren … what were they doing there? They’d been on their way to Wisconsin, unless there’d been a change in plans. Hadn’t Chris been up to Oren already? Right; that’s where he’d gotten the books. So Chris had been there not long ago.

Kincaid: Either you boys hurt? You boys get a name?

If Kincaid was worried about that, he must’ve figured there was a fight. Getting a name, though, suggested not only other people but … a conversation? Or — oh my God — a trade? Something worse?

The above section of text is an entire journey. Alex’s thoughts follow a simple “if/then” logic. However the simplicity of her thoughts isn’t the point, rather, it is the expression of her thoughts which become tantamount in this discussion. Her “active thought act” begins with a very small flicker (literally, from the heat of a physical object3) and launches her mind on a journey. A lingering tick, buried beneath the sleeplessness of her mind, tugs at her. The reader follows her through the acknowledgements of falsehoods and lies of people she trusts; through inference of ideas and memories of other character’s dialogue and actions; through assumptions to a false notion of truth; passed that and into something much deeper, much darker – the actual truth.

In Alex’s acknowledgement of the truth, Bick is also raising the stakes, forcing Alex to make a decision. And the decision creates a physical action, which, in turn, clicks the plot forward. Ideally, this is what all “active thought acts” should do. However, they do not always. Some, sadly, fail to do anything. Veronica Roth’s Allegiant successfully fails at “thought acts.”

In Chapter 51 of Allegiant, Tobias is our narrator:

I feel a twinge of guilt. I didn’t come here to ask her to lay down arms for me, to trade in everything she’s worked for just to get me back. But then again, I didn’t come here to give her any choice at all. I guess Tris was right — when you have to choose between two bad options, you pick the one that saves the people you love. I wouldn’t have been saving Evelyn by giving her that serum. I would have been destroying her. (Roth pg 299 iPad Nook App)

Beside the paragraph’s numerous writing issues, it’s greatest failure is that it’s not a thought act. It has all the criteria to be such: a character’s feelings precipitate thought, a change of mind, and then a physical action which affects the plot. However, the author tells the reader what Tobias is thinking instead of expressing his thoughts on the page. Thus, the reader is unattached to the thoughts. The character becomes foreign. His thoughts hold no emotionality, even though he is engaging in an emotional decision. Tobias makes his decision off the page, so the reader cannot join him on his thought journey. Somehow Roth takes a first person perspective, (the most intimate narrative perspective) and alienates the reader from a once beloved character.

A closer look at this paragraph reveals why it fails. Mostly, the writing itself is inactive. The verbs are lazy, inactive and peppered with conditional clauses. For instance, “I wouldn’t have been saving Evelyn by giving her that serum. I would have been destroying her” might be better phrased as “I wouldn’t save Evelyn with that serum. I’d destroy her.” Tighter, more active, more dangerous and thus more exciting. Also, the conceptual ideas are simplistic and impersonal, if not downright patronizing. As a reader, I often found these issues in Roth’s book.

Further, Roth’s plot is slow, I assume because it’s trying to be contemplative. I don’t disagree with this choice. Maybe it was the correct decision for the series’ end. However, just because the action slows, does not excuse the deadness of mental development and intellectual activity. Rather, the mental worlds should be heightened or, at the very least, written well. Instead, Roth decided to lecture her readers on the “lessons” of her series. In turn, the readers disengage emotionally. The reader wants story not lectures from our novels. Roth’s failure to create an interesting plot coupled with her failure to create active internal lives, leave her readers unengaged and disappointed. Unfortunately, Allegiant acts as its own memory serum of the once promising trilogy.

14 thoughts on “Allegiant: Thought Acts in YA Lit”