So, when a highly progressive artist, who has and continues to expand, question, and experiment within their medium is attacked for a concern that is utterly unimportant to their Interests, I bristle. One such attack happened recently to a young adult author, which I was not only dumbfounded by, but utterly angry about. (He took the accusations much more gracefully than I would have.)

Not everyone agrees that every artist is responsible for furthering the theoretics of their art form. I am willing to cede this point, if those nay-sayers agree that not all artists are responsible for towing a specific socio-political line within their work. It seems some readers’ expect authors to be Übermensches (or in feminist terminology, Superwomen). They must do everything, speak for everything, stand up for everything, be a voice for everything and everyone, all in a single book, a single career. Is this fair or is it as outdated as the Superwoman?

Andrew Smith is an auteur of young adult literature. He, like his female cohort, A.S. King, have done wonders for young adult books by illustrating that children’s book may be literary and technically progressive.

Further, he introduces youths to experimental literature; pushing teens to stretch their minds, their understanding of words and the strange, familiar world in which they live. The odd, the unique, the weird, the dislocated, the confused, Smith is representing a world through story and images in a raw, exaggerated, singular and confused way. Perhaps the way that teens  actually feel in their everyday lives (I certainly did as a teen). He introduces the avant-garde to the generation for whom he writes, while questioning and exploring the theoretics of storytelling in general.

or Stephanie Perkins or Danielle Paige ever been questioned about their lack of male protagonists? The reaction toward Smith’s interview was blatantly sexist. Why else are expectations of Smith higher than those of females in the same industry?

Regardless of the socio-political issues, let’s return to the more important question: must all artists be proficient at everything? Did anyone ask of David Foster Wallace’s Brief Interviews with Hideous Men, “where are all the female characters?” Or ask Stephenie Meyer, “why aren’t there faeries in Twilight?” Not that I can remember. In addition to artistic progressiveness and inventive avant-garde commercialism, Andrew Smith is required to also pen characters, that, self-admittedly, aren’t his strong suit. And should he fail at this demand — which lays outside of his artistic Interests — the YA-verse defames him. Is this fair, or even logical?

Smith’s work in young adult literature, and literature in general, is important. He is already (self) burdened with progressing the form, and is doing so successfully and with gusto. So, instead of attacking artists for what they aren’t doing, perhaps we should appreciate what they are doing. 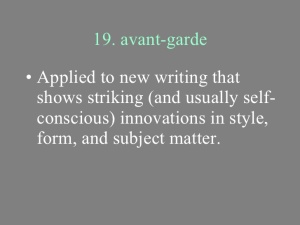 One thought on “On Andrew Smith and Attacking the Avant-Garde”