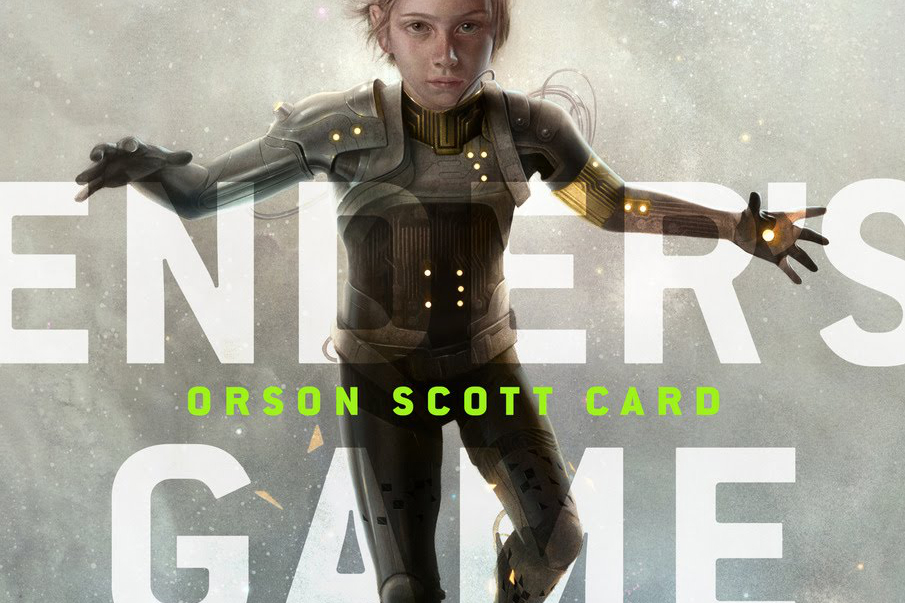 Ender’s Game by Orson Scott Card was published in 1977. So, maybe my fondness for it has something to do with the fact that I missed it growing it. But when the YA explosion hit, Ender’s Game was dusted off and replaced front and center. The books (four in the original series, with a multitude of other offshoots), like so few others in the contemporary young adult category, are timeless. Adeptly written, intellectually provocative, morally ambivalent, and actively emotional, it’s no wonder Ender’s Game is still popular today. (The movie released in November 2013.)

The reader takes immediately to Andrew “Ender” Wiggin, one of YA’s most adored characters. But why is Ender so gosh-darn likable? Phrased differently: how does a writer create character? My first answer for Ender lay in his vulnerability, intellect and honesty. A mere six years old when the book begins, he is in the nurse’s office at school:

…We’re going to take it right out, and it won’t hurt a bit.’

Ender nodded. It was a lie, of course, that it wouldn’t hurt a bit. But since adults always said it when it was going to hurt, he could count on that statement as an accurate prediction of the future. Sometimes lies were more dependable than the truth.(Nook App on iPad mini, pg 26)

Ender almost dies when the doctor removes his monitor. It’s not just the object in the back of Ender’s head that the reader and our protagonist lose — the real loss is the trustworthiness of adults, and, thus the creation of the Ender’s true nemeses (adults, not buggers). Within three pages of the novel’s beginning, Ender is introduced as a child who calls out adults’ lies, is vulnerable to other’s actions, and intensely intelligent and self-aware. Further, the language Card uses, “statement,” “accurate prediction of the future” and “lies were more dependable than the truth,” is the language of adults. Card does not make Ender, nor his siblings, speak as children, although emotionally and physically they are at the whims of adults, intellectually they are equals.

Here is an example of an adult (Graff) gaining Ender’s respect, but, outside of Ender’s view, the reader knows that Graff will test Ender to the edge of his humanity. The reader is boxed into believing and trusting only in Ender, who is constantly tortured by adults, larger students, even his family. The reader can only trust in our protagonist, because everyone else is a liar and/or hurtful.

Ender, who is blatantly honest with himself, as well as other, often straightforwardly expresses his emotions: “I’m afraid,” or “It was Ender’s first time fighting as part of a toon; he was nervous” (Card 105). The six-year-old is defined by the trials of his life – the bullies on Earth, the bullies at battle school, the bully of a brother, the love of a sister, the untrustworthy adults, the semi-caring parents, etc. It is how Ender deals with these people and the situations that define him. His choices mostly make us respect, if not downright, like him. However, Ender is not without his faults – if he were, he would not be relatable. Even when Ender makes mistakes, picking on a smaller boy, he hates himself afterward. It is this self-reflection and awareness, his constant questioning of his own actions, that make his incorrect choices valuable.

What a character does and how he does it create character. It is the author’s job to make these choices of what and how for their characters. Also, an author must complicate the character’s situation thus forcing them into making decisions. Without creating adversities, the character will not be forced to make decisions, and thus not change.

The reader expects Ender’s honesty, with himself and his fellow characters, while those around him lie and manipulate. Essentially, Mr. Card, whether purposely or unknowingly, creates one of the few reliable narrators of the 20th century. Card also illustrates how a cardinal rule of writing (“showing vs. telling”) can be broken. “He was nervous,” (Card 105) instead of “he picked at the inside of his pocket, shifting his feet” or a bevy of other (less cliché) actions a character might do to express nervousness. Card is able to get away with this stylistic “telling” choice because it is who Ender is. Ender’s honesty, his fictional personhood is located in this simplistic expression of truth. Further, Card makes the conscious stylistic choice to write this way.

One might say that this use of “telling” instead of “showing” is common in children’s literature, and I do not have the education to disprove them. However, does this make the character less appealing? Does it change the reader’s emotional stake in the character? I would say not in Ender’s case. As a reader, I trust Ender and by stating this, I am also stating that his perspective is reliable 1.

Again, we’re at the point where the exploration of one aspect of writing (building character) leads directly into another aspect (“showing vs. telling”). However, discussing the creation of character, like any aspect of writing, is a slippery slope. Once you feel like you’ve nailed down one concept, another slips away, at the same time folding into and out of others.

I’m sure I will return to this subject again on this blog. Below are a few of my favorite quotes from James Wood’s How Fiction Works about character:

Of course characters are assemblages of words, because literature is such an assemblage of words; this tells us absolutely nothing, and is like elaborately informing us that a novel cannot really create an imagined “world,” because it is just a bound codex of paper pages. (Wood 103-4)

But to repeat, what is a character? I am thicketed in qualifications: if I say that a character seems connected to consciousness, to the use of a mind, the many superb examples of characters who seem to think very little, who are rarely seen thinking, bristle up (Gatsby, Captain Ahab, Becky Sharp, Widmerpool, Jean Brodie). If I refine the thought by repeating that a character at least has some essential connection to an interior life, to inwardness, is seen ‘from within,’ I am presented with the nicely opposing examples of those two adulterers, Anna Karenina and Effi Briest, the first of whom does a lot of reflection, and is seen internally as well as externally. (Wood 105)

From David Mamet’s On Directing Film:

…there is no such thing [as character]. It does not exist. The character is just habitual action. ‘Character’ is exactly what the person literally does in pursuit of the superobjective. (Mamet pg 13)

True character can only be expressed through choice in dilemma. How the person chooses to act under pressure is who he is – the greater the pressure, the truer and deeper the choice to character. (McKee pg 375)

10 thoughts on “Ender’s Game: The Utterly Reliable Narrator in YA Lit”