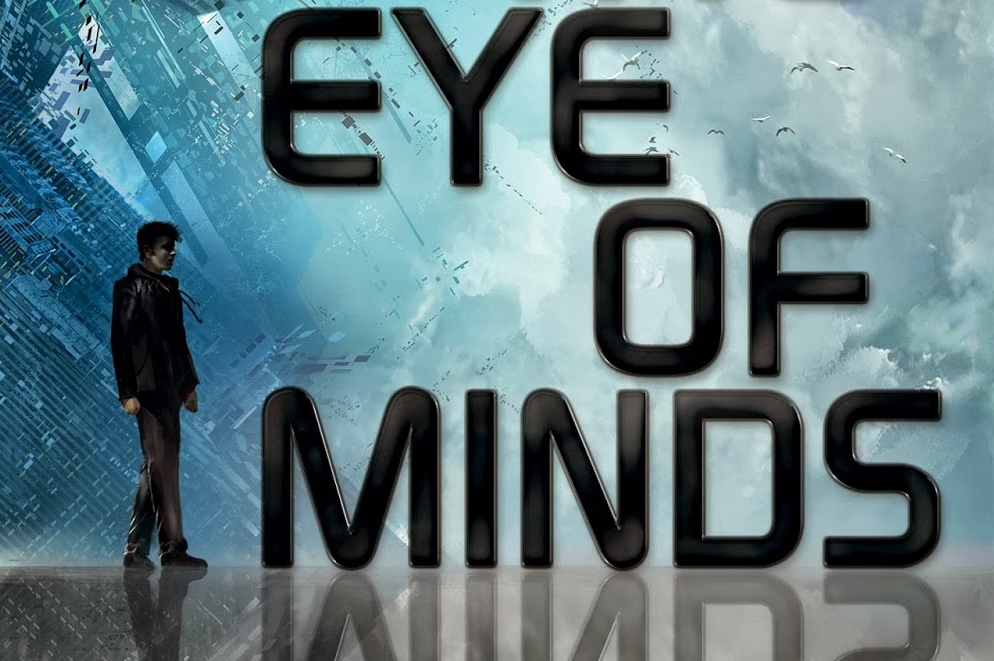 MAJOR SPOILER ALERT! I give away the ending! I apologize, I’m attempting to not do this. However, in this case, it became necessary. Your forgiveness is requested.

Further, a quick warning: This post contains semi-purposeful, stylistically referential, digressions, as well as theories I have no right discussing. Also, it’s rather long. And there are a lot of (i.e., too many) footnotes.

James Dashner had his own shoes to fill following The Maze Runner series. His “high concept1” The Eye of Minds almost suffices. Dashner unearths almost a decade-old worth of reality-bending cultural influences – The Matrix, Inception, even the cult-classic eXistenZ, and reintroduces warped realism to YA2. Dashner also illustrates the influences of authors William Gibson, Philip K. Dick and Ray Bradbury, and movies Tron and Stay, in his fiction.

One exciting aspect of Dashner’s new novel is its complexity. The book requires an active, attentive reader. (I am ecstatic that some YA authors3 require a higher reading comprehension from fans4.) Eye’s complications lay in the conception of its story and plot. To structure the story, Dashner uses game logic5, engaging his protagonist and antagonist in an intense Go-esque6 power struggle. The main characters enter a virtual reality game where they must complete a hierarchy of levels to achieve their goal. Each subsequent level increases in difficulty like a primitive video game structure. When the characters reach a level, they must learn a new set of “rules” then decide and perform a successful action. Each level may have its own, unique set of “rules” or “laws of logic.” For instance, in one level, a weapon used to perform a kill, may not achieve a kill in the next (or, further, the weapon may not even be available in subsequent levels). Technically, this authorial choice constantly re-enlists a reader’s curiosity and “what happens next” response. The rules change as regularly as a new chapter, leaving the reader in a continually state of questioning and, thus, engagement.

Dashner successfully creates coherent, interesting game-like levels early in the novel. However, as the characters proceed deeper into the virtual world, the levels’ logic decays. The virtual world becomes convoluted, unstructured, unruly, departing from a recognizable reality. At this point, the reader requires something recognizable and, more importantly, trustworthy, to steady them.

So, how does an author not confuse, and thus alienate, the reader when fabricating an inconsistent and illogical world? A point of reference must be established7. Something that the reader can intellectually and/or emotionally grasp as stable, trustworthy, and most importantly, consistent. A point from which they can judge the volatile world. (In the film Inception, Totems tested the realities for the characters and, through the characters, the viewers.) So, what is the point of reference in The Eye of Minds? Perhaps, like in propositional logic8, it is simply trusting that when told something is true/real or untrue/false, it is so. In which case, we are discussing the reliability of the author, the trustworthiness of fiction, the story’s plausibility.

Donald Maass writes about the plausibility of a novel’s premise in Writing the Breakout Novel:

When an author pitches a great story premise almost always the first question that springs to my mind (and I will bet yours, too) is this: Could that really happen? It is an odd question. Fiction is not life. And yet for some reason most readers, me included, need to feel that the story we are being presented has some basis in reality.

Why? The answer to the question lies in part in the psychology of storytelling, or rather story receiving. A work of fiction grips our imaginations because we care, both about the characters in the tale and about ourselves. To put it another way, we are concerned about the outcome of the story because what is happening to the characters could happen to us.

Looked at that way, the requirement that a premise be plausible is not so strange. If it could not really happen, then why should we bother with it?

I’m uncertain if Maass is completely correct here. Sure, stories need to be relatable; usually this is due to the characters being likable. So, do premises need to be something that could happen or have “some basis in reality?9” I’m certainly not attending Hogwarts, nor killing aliens; this doesn’t mean Harry Potter or Ender’s Game’s premises are ambiguous. Maass vaguely infers that premises do not need to be something that can happen10 to us, rather the characters require situations primed for emotional honesty. So, the question springing to his mind should be “does the fictional premise evoke in the fictional character(s) a fictional emotional arc that real life reader(s) can relate to real life emotions arising from their real life situations?” And if the answer to this question is “yes” then it is a plausible premise. Perhaps I am interpreting Maass’ language too literally, but he is a literary agent, directive should matter to him.

However, a book’s premise is not the only aspect which requires credibility. The entire act of fiction writing should be credible. So, the next question, is how does a writer accomplish this? Allow me to postulate the following: Fiction’s plausibility is established in characters’ verifiably honest emotional states and the congruity of an imaginary world.

By agreeing the above assumption is true, we may (finally) return to The Eye of Minds. Specifically, how does Dashner authenticate plausibility in his novel, especially when the logical landscape goes topsy-turvy? What is the reader’s point of reference? (If the author’s intent is to disturb the reader’s ordinary perspective, then they must know what they are being disturbed from.) What is their Totem? What is the one consistent thing in the novel? In The Eye of Minds, it is the characters, of course! Dashner ensures that his protagonist, Michael, and best friends, Bryson and Sarah, are trustworthy, strong, and amiable. We like them. We enjoy their working together to reach Lifeblood Deep. We relate to their abilities and flaws in contrast to one another. They as individuals, their emotions and their friendships are plausible. They are the reader’s point of reference when the fictional world turns volatile and disjointed. They are the buoys which tell the reader that the world is falling apart.

Dashner’s characters are the reader’s stable ground. However, there is a slight authorial hiccup. (Yes, Mr. Dashner, we’ve discovered a chink in your bestselling armor.) At the end of the book, Michael discovers he is not human, but a Tangent who has just been “transferred” into a human body. Michael being a Tangent does not negate him as a reference point. The consistency of Michael’s attributes, his choices, friendships, thought processes, and emotions are how the reader relates to and trusts him as their touchstone (even though he is a narrative protagonist and not direct narrator).

The issue arises when Dashner divorces Michael’s thought acts from the reader. Michael awakens from Sleep in an unfamiliar apartment, looks out the window, sees his reflection, runs to the bathroom mirror, and confirms that he is in a foreign body. He remembers a message waiting for him on his NetScreen. He listens to Kaine’s explanation confirming him as “the first subject to successfully implement the Mortality Doctrine” (Chapter 25, Section 2, pg 211, Nook App on iPad). Michael is not human.

And in one horrifying moment, it all made sense.

Michael was a creation of artificial intelligence, a Tangent, a computer program.

Everything about his entire life has been fake, and he now understood every bit of it. His ‘home,’ his ‘Wake’ had been within Lifeblood Deep — those signs he’d seen every day outside his window weren’t advertisements. They were labels. Location plates.

Dashner goes on an explanatory spree for the rest of the book. The discursive style (often referred to as “telling” or “exposition”) blocks the reader from Michael’s emotional experience during his self-realization. Further, “And in one horrifying moment, it all made sense,” and “…he now understood every bit of it,” are logic jumps uncharacteristic of Michael. Dashner eliminates Michael’s active thought acts, in favor of quick conclusions, then back fills the logic holes with exposition.

Why does Dashner divorce his readers from his protagonist? Possibly, it’s just lazy writing11; agents or editors spurning Dashner to completion, maybe his advice was required on The Maze Runner movie sets. Perhaps it was a conscious choice, illuminating a Tangent’s lack of humanity, heightening his “otherness.” Or, it was necessary to pack a mass of information into a few pages, ensuring reader’s comprehension of the fictional world and protagonist in preparation for the series’ next book. The possibilities are practically endless and may only be known to the author.

Unfortunately, the estrangement undermines the novel’s plausibility. If, as above, “plausibility is established in characters’ verifiably honest emotional states and the congruity of an imaginary world,” splitting Michael from reader calls into question the novel’s credibility. The protagonist’s emotional state (i.e., the readers’ touchstone) is unverifiable because the reader cannot access it. Without Michael as the point of emotional reference, the reader questions if they can trust him, his story and at large the novel itself. Further, what was the point of investing emotions and time into a 214-page book?

In time travel stories, there’s always a moment when the scientific is sacrificed for the drama. In The Eye of Minds, Dashner sacrifices plausibility for…well, I don’t know yet. I’ll have to wait for the sequel, The Rule of Thoughts, available August 26, 2014.

3 thoughts on “The Eye of Minds: Pragmatic Implausibility in YA Lit”